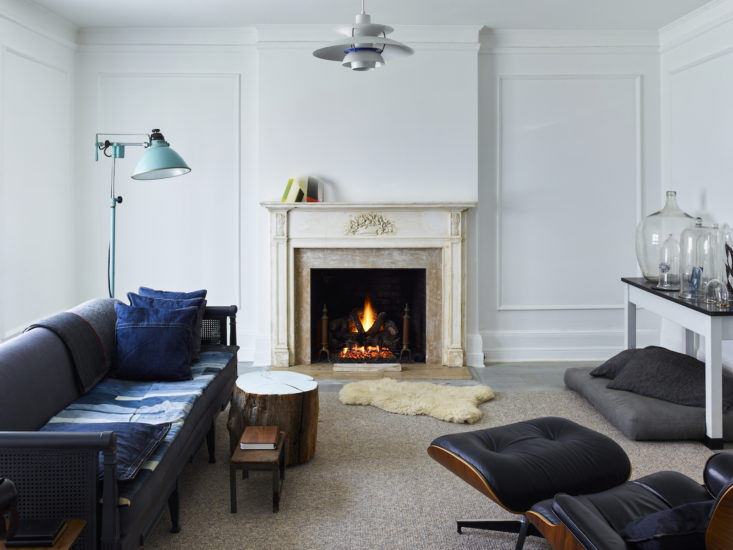 Take a stroll on Roosevelt Avenue in the Jackson Heights neighborhood of Queens, and what you’ll encounter is movie-perfect New York City in all its loud and colorful glory: the din of the elevated subway line, pedestrians rushing to catch trains, and clusters of food trucks serving cheap and delicious foods. But walk just a few blocks north and suddenly, it’s quiet enough to hear the birds chirping. Here, tall trees line streets populated by stately apartment buildings and the sidewalks are nearly empty. This is the historic section of Jackson Heights, and it’s where creative director Matthew Axe has made a serene and stylish home with his husband, Peyton Hays, an orthopedic surgeon.

The couple moved into The Chateau (many of the area’s landmarked buildings have names) in 2011, attracted to the neighborhood’s affordable real estate, classic architecture, and community of like-minded creatives. Their 1,120-square-foot two-bedroom apartment was perfectly sized for the couple and their Welsh terrier, Rusty. Even better, it hadn’t been stripped of its period charm. “My remodeling philosophy is don’t get rid of anything original,” says Axe, who has art-directed for brands such as Jo Malone London, Kohler, Bellocq, and Martha Stewart Living.

With that in mind, the couple was bent on keeping the apartment’s original molding, built-ins, and hardware when possible. Even idiosyncratic features, like oddly placed radiators, were allowed to stay. Axe and Hays did remodel the kitchen and bathroom, both of which were sorely in need of updates, but they were careful to choose styles and fixtures that were timeless and in keeping with the 1920s building.

The couple may have been accepting of the apartment’s bones, but when it came time to furnish it, they were ruthless about which pieces made it into their home. “If something isn’t useful or beautiful, it goes,” says Axe, of their decorating style. The tranquil home they ultimately created together is an exercise in uncommon restraint and elegant minimalism. Come see for yourself. (And when you’re done with the tour, be sure to check out all the great storage ideas in their apartment over on The Organized Home.)

Photography by Eric Piasecki for Remodelista.

Above: “I like the furnishings to build as time goes by,” says Axe. “I tend to make terrible decisions when rushed.” He and Hays enjoy hunting for vintage treasures: They found the sofa at a Goodwill store in Worcester, Massachusetts, and had it reupholstered with linen from the Garment District in New York City. The industrial turquoise floor lamp was a flea-market find. The [product id=”604840″]Ph5 Pendant Lamp[/product] from Design Within Reach is just about the only piece that’s completely new in the living room. 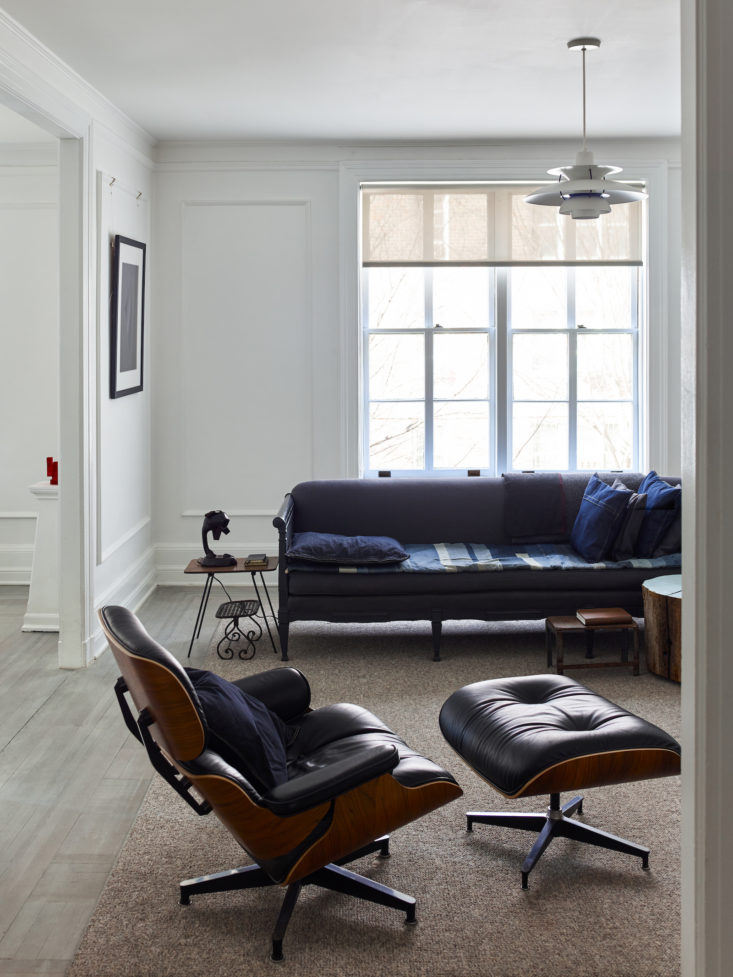 Above: The quilt on the sofa was made by Martha Stewart Living style editors for a denim crafting story years ago (you can read about it here); Axe later scooped it up at the magazine’s annual tag sale. The quilt, folded in half, now acts as a stylish and washable cushion cover, a necessity when you have a dog who has free rein over the furniture. 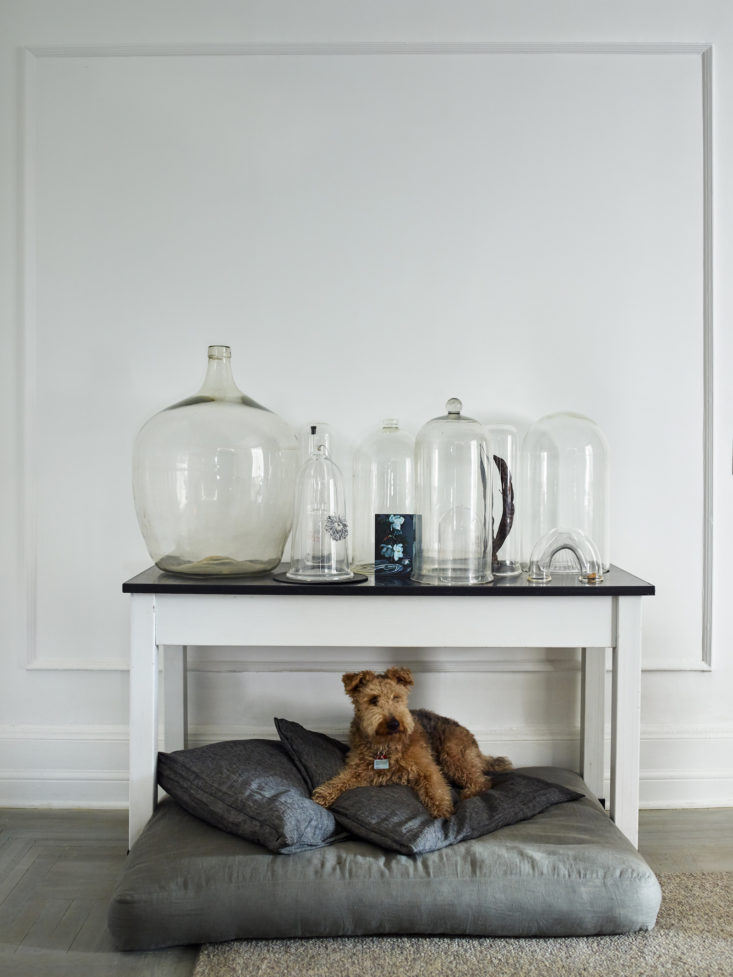 Above: Rusty relaxes on his cushioned perch. Above him is a collection of cloches (and one giant glass jug), all sourced from various junk shops in the UK; the table on which they sit is an eBay score. The hardwood floor throughout the home is original to the apartment, but Axe and Hays had it sanded, popped (a process that opens the grain in wood flooring), primed with lye (which further enhances the grain), then stained with white oil for a washed-gray look. 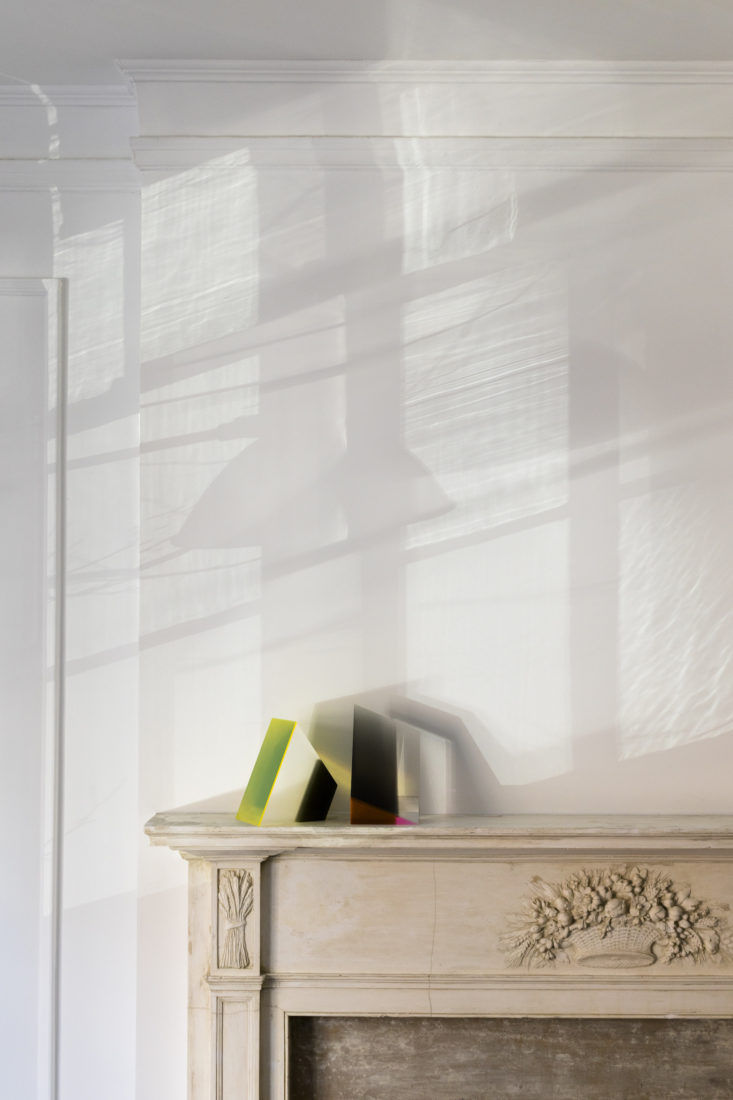 Above: The couple had the original wood fireplace mantel stripped for a more modern look. Resting on it are one-of-a-kind acrylic sculptures, their anniversary presents to each other, by NYC-based artist Phillip Low.

Above: “To be honest, I’d prefer nothing on any of the walls!” says Axe. “That said, I like to think of hanging pictures as composing a photograph. My main goal for this apartment was how you view pictures from other rooms, as all the rooms are linked.” Here, a framed photograph by his friend Richard Foster hangs next to the doorway that connects the living room to the dining room. 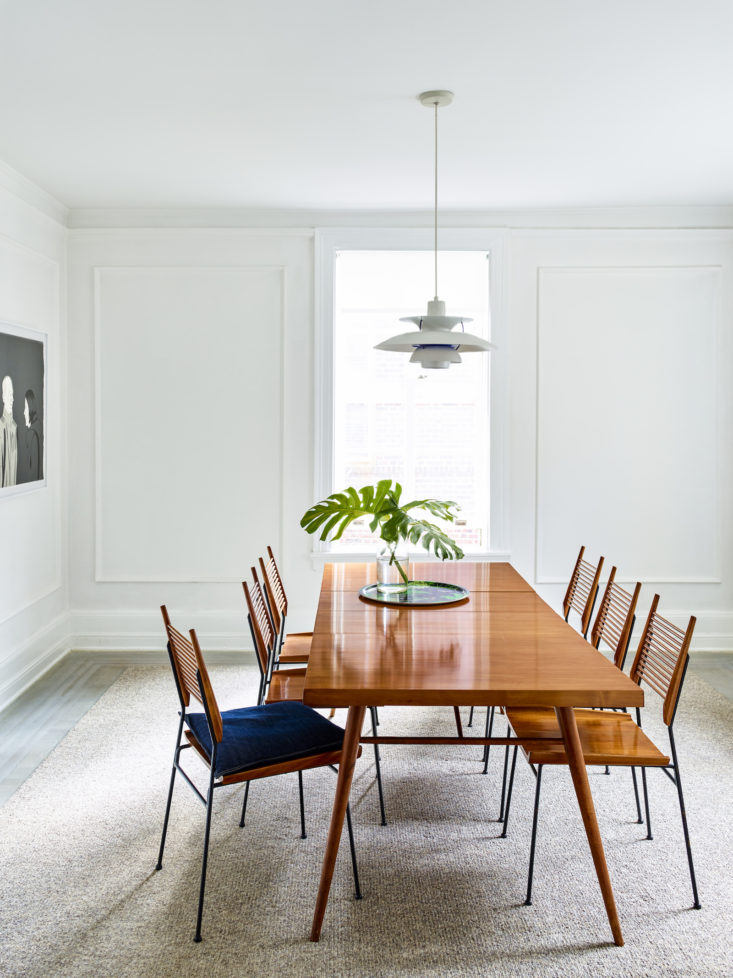 Above: Axe found the Paul McCobb dining set on eBay. Like the quilt on the sofa, the carpeting throughout the house was chosen for its dog-friendliness: The couple found the durable floor covering at Home Depot and had it cut to size for every room (see a similar version [product id=”1001547″]here[/product]). “The key is to make sure it’s flecked because then stains don’t show up as much,” Axe says. 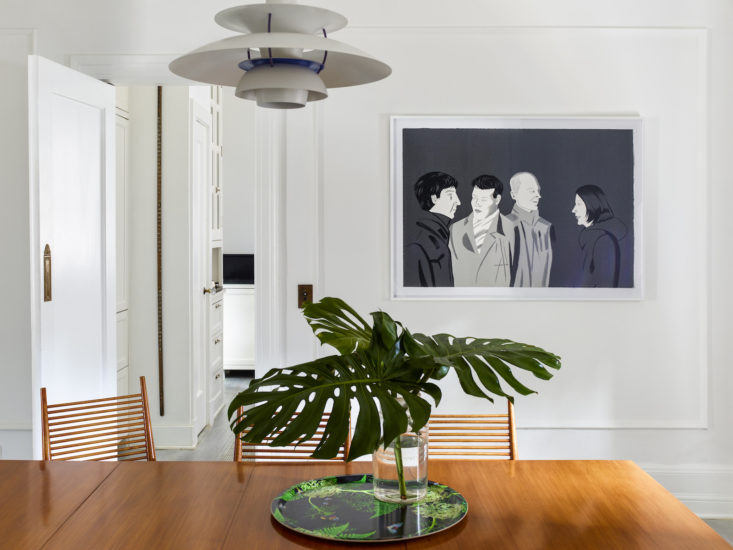 Above: The dining set takes the spotlight in this room, but a screenprint by artist Alex Katz is also an attention-getter. On the table is a melamine-coated birch [product id=”1001541″]Dill Black Wood Tray[/product] by Michael Angove.

Above: Axe had admired so many soapstone counters during his tenure at Martha Stewart Living that when it came time to remodel his own kitchen, there was no question what type of countertop he would choose. The soapstone counter doesn’t stop at the window sill but extends into the window casing, providing both a streamlined look and extra counter space. 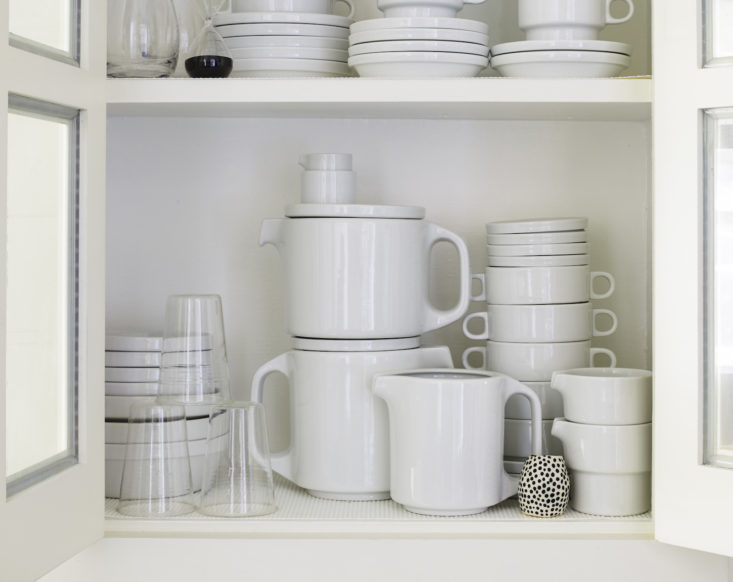 Above: Axe is an avid collector of stackable TC100 tableware by Hans Roericht and has amassed quite the collection over the years. The design is part of the Museum of Modern Art’s permanent collection.

Above: The wall-mounted Vitsoe shelving unit in the couple’s study is “by far the most expensive piece in our apartment,” says Axe. “I love the quality and the design, and how discreet yet imposing it is.” On the floor is a vintage fan. 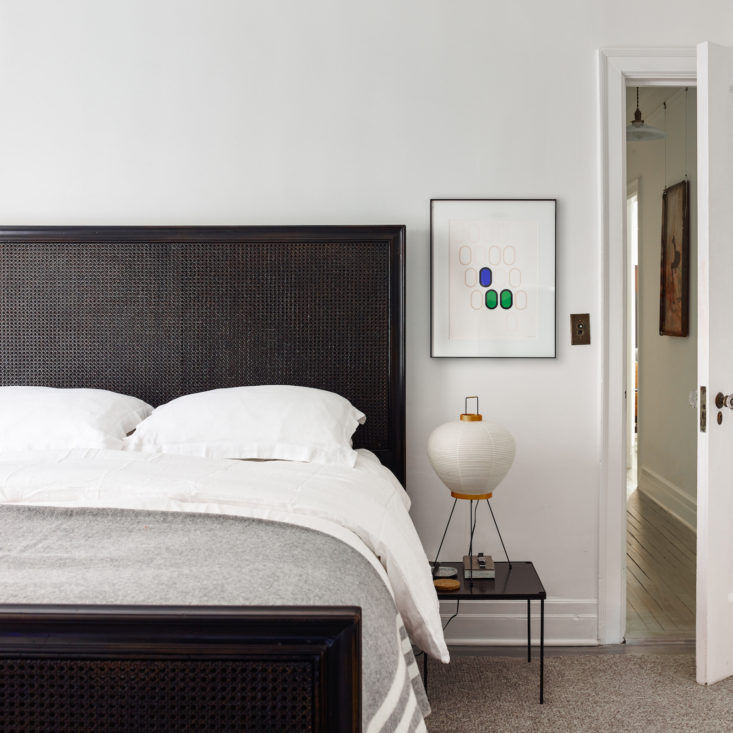 Above: The couple’s bedroom faces the interior garden, an amenity that many Jackson Heights apartment buildings have. Their simple [product id=”1001543″]Maison Caned Bed[/product] is from Restoration Hardware. They bought the art on the street in Hell’s Kitchen. 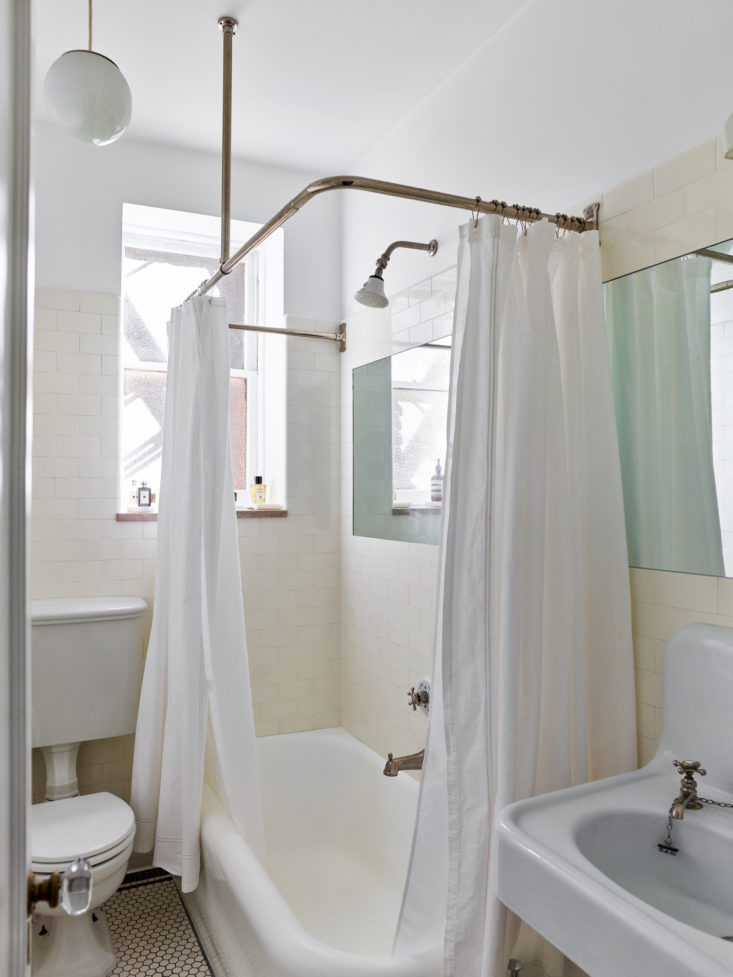 Above: Axe hit eBay and antiques dealers to source the period-appropriate sink, toilet, and bathroom hardware. The only piece in this room that’s original to the apartment is the tub.

Here are some other beautiful NYC apartments: 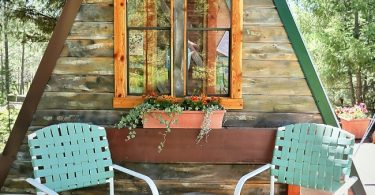 To some, a pile of scrap wood might look like trash. But for Alla and Garrett Ponomareva, it was an... 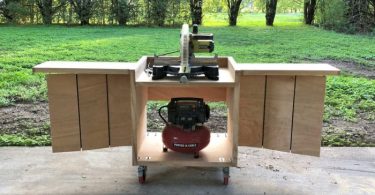 Have you ever waited a really long time — years, even — to buy something or do something that you... 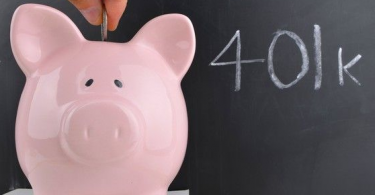 With Social Security trust fund reserves waning—predicted to be depleted by 2034, leaving Social...

Leaping (or lurching) into a kitchen remodel? If so, you’re likely about to make an important...